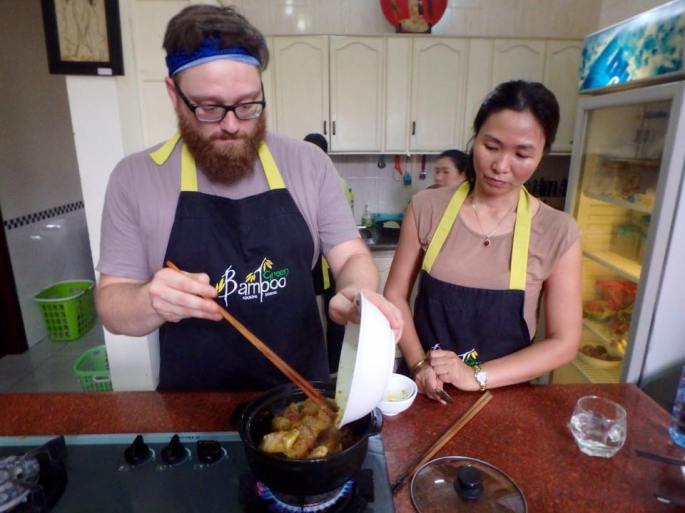 I firmly believe the best way into a culture is through its food. That, however, doesn’t always mean simply eating as much as you can (although I do that as much as possible). Cooking classes can often give you a deeper look into the people somewhere—especially those that include market visits.  You’ll often learn about techniques and ingredients you otherwise would not have learned about, and get deeper insight into the food you’d otherwise only have eaten: where it comes from, who makes it, and how its made.  One of the best examples of this I’ve ever experienced was the Green Bamboo Cooking School in Hoi An, Vietnam.

The class, lead by Van for an extremely reasonable $45, begins at 8:00am with a pickup at your hotel. While in the car picking up the other participants, you’ll be given a list of 50 or so dishes, and everyone in the class gets to pick one.  By the time you arrive at the market, Van has a list of dishes that will be made that day and knows which ingredients to pick up.  You’ll start with fresh herbs and vegetables, before going into the fish market to get any ingredients you may need there, through the meat section, and ending with the most important ingredient: the noodles (including the legendary local cao lao noodles).

Markets traversed, ingredients amassed, and knowledge imparted, you’ll next stop for a quick Vietnamese coffee to get your energy up before your marathon cooking experience.  Van, with two helpers, will take you back to her house and gather you around, setting up the menu and who will cook when to make a reasonable facsimile of a meal (ie, if you picked an appetizer, you’ll be cooking near the beginning). Some of the dishes, like summer rolls, everyone gets to try their hands at.  Otherwise, everyone is given their prep instructions, a selection of beer, and work gets underway.

When a dish is ready to be cooked, that person is called up to the stove and the cooking begins. After each dish is complete, it is divvied up so everyone in the class can taste it.  This makes for a day tasting a lot of food, but never quite too much—though, by the time class is over, you may not need dinner that night (and you may need a nap).  After class, everyone is given a cookbook of all the dishes along with a multi-use vegetable peeler perfect for papaya salad and a pair of long cooking chopsticks.  I was probably more excited about getting these than I should have been.

This was easily one of the standout days of our time in Vietnam, which is impressive because looking back it seems like they were all standout days.  The class, the food, and just being in a relaxed and beautiful town like Hoi An all contributed to the fun.  Van is an excellent teacher, and makes sure any questions are answered and everyone leaves satisfied.  It should be a must on any trip to Hoi An. 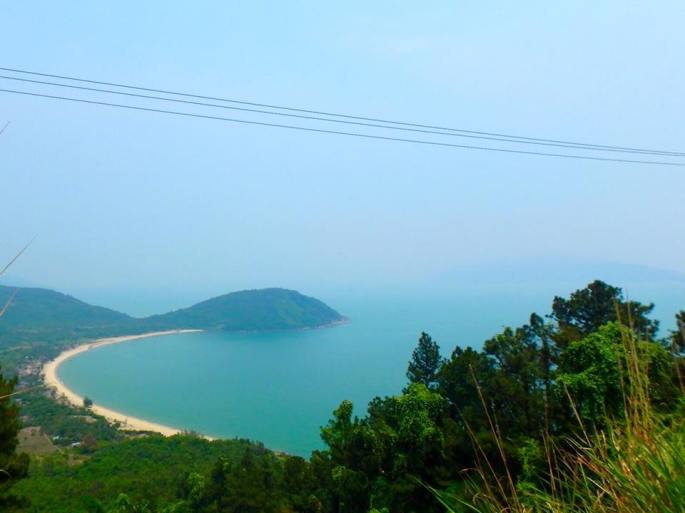 Since the trip from Huế to Hội An wasn’t as long as our previous trips, we wanted a little more than the train rides we’d been having (especially since they were all overnight trains).  We briefly considered riding on the back of motorbikes, but it seemed like having our packs on a 2.5-hour motorbike trip might be a little excessive.  We opted to hire a car for the drive, which the receptionist at the Jade Hotel in Huế worked out for us.  The cost came to about $65 USD.

There were two immediate benefits to the private transport: one, there was no shortage of air conditioning.  Two, we were allowed to drink in the car.  While the driver stopped and picked us up some water, we also took along some Huda beers for the ride. The first part, leaving Huế and hopping on the highway, was pretty unremarkable.  Well, as unremarkable as it can be driving around in Vietnam. 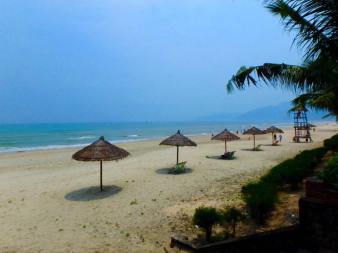 After about an hour, we pulled into a small hotel/resort kind of spot and the driver, whose grasp on English was loose at best, told us we could use the restroom there and walk around.  We were at Lang Co Beach, which was very nice (but using the restroom was nicer).  Not being much in the way of beach people, we took a gander and walked around to stretch our legs, but would have rather been back in the car.

Soon after our beach stop, we made it to the Hải Vân Pass with its winding road along the mountainside.  We stopped at a popular look-off to get pictures, and then pulled in to a small rest area to check out a bunker on the pass.  Originally a French fort, the bunker was then used by the Americans in the Vietnam War as a lookout, as it offered views all up and down the coast.  After perusing the site, we stopped at one of the stands for some ice cream bars.  I picked up one that I thought was pineapple, but realized too late (in the car, driving) that it was actually durian.  I had no place to put it, so I had to eat it.

Soon after, near Da Nang, we were able to stop at Marble Mountain.  I didn’t think much of it at first, and was hoping we could actually skip it in order to get to Hội An more quickly, but as it was paid for as part of our ride and our driver apparently wanted a break, we hopped on the large elevator to the top and were immediately glad we’d gone.

In addition to the many marble statues and figures on the mountain, there are many Buddhist sanctuaries and grottoes, many within the mountain itself.  Going down into the cave and being in this hushed sanctuary while sunlight streamed in from various holes in the mountain was awe-inspiring and turned out to be one of the best parts of the trip.  Inside the mountain was cool and calm with everyone being reverent and speaking in hushed tones.  The most impressive part may have been the statue of a woman carved directly out of the side of one of the cave walls. 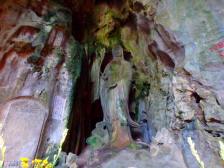 After exploring some more and then walking down the many steps from the top of the mountain (we only got a ticket up the elevator), we found our driver.  No, we didn’t want to purchase any massive statues of Buddha or dragons—no matter how cheap they were, they would have cost a fortune to get home.  Plus, I’m not a souvenir-buying kind of guy; I want the least amount possible in my pack.

The rest of the trip into Hội An was unremarkable, past the beaches and the resorts popping up in Da Nang.  We arrived at our homestay with enough time to track down the best banh mi we’ve ever had—but that’s another story.

This trip, if possible, is highly recommended—either way you do it.  Whether you go from Hội An to Huế or the reverse, make sure to get private transport and at the very least stop at Marble Mountain.  If you enjoy a relaxed trip that gives you plenty of incredible scenery, the $65 is an absolute bargain.  Just make sure you don’t accidentally get the durian ice cream.

Finally made it out to @lacroixrestaurant with @ktgoeshiking for their Sunday brunch, and it did not disappoint. Way too much food to list it all, but if you ever go, definitely get the Matcha cocktail.
Finally got to try the Fishtown Scrapple at @breakfast.at.sulimays and it might be better than regular scrapple. The “comeback sauce” will certainly make me do just that.
We did a lot of driving in the rain today, but we did get to see the #Røldal stave church (which is perfect for #spookyseason), #Låtefossen, and #Langfossen.
#Undredal: It’s not fair that people get to actually live in a place that looks like this.
A few shots from our trip to #Aurlandsfjord to check out the #Stegastein overlook and take a hike up Mount #Prest. All in all, a pretty terrific day. #fastandthefjordious
Our home in #Norway for the next week, plus our first camping spot.