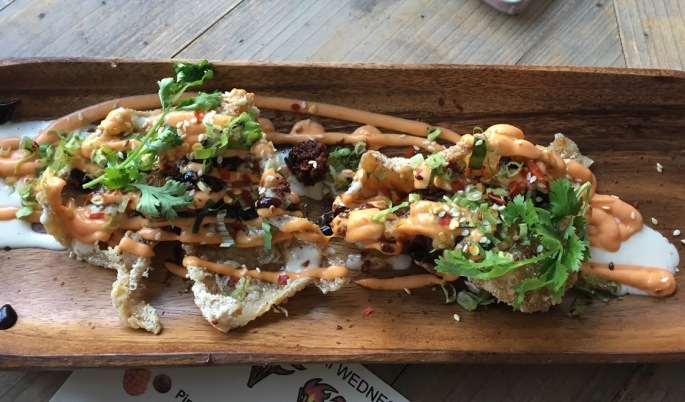 As I’ve mentioned before, Halifax is indeed one of my favorite cities in all of North America.  I don’t know if it’s the idyllic weather, the excellent waterfront, or the fact that despite continuously growing it still retains a small-town walkability, but I always love going there.  And one of the thing that keeps me going back is the food—of which Halifax has plenty.  The scene there is always growing, and it will keep you satisfied from early morning to, well, early morning, if you want to stay up that late. So whatever time of day you’re out and get a craving for some food, here is a list of my favorite places to give in to that craving.

I’ve mentioned Stillwell before in our beer roundup, but—surprise!—it also has great food.  You should start, without question, with the Okonomiyaki fries: a pile of fries with kewpie mayo, okonomiyaki sauce, sriracha, nori, katsuobushi, and sesame seeds.  The southern-fried chicken sandwich and General Tso’s squash, if on the menu, are also worth trying out.  As is anything they list, because I’ve never had a bad dish there. 1672 Barrington Street

I’m a sucker for Asian-inspired anything, and Studio East is no different.  The quirky space has some great good and a solid drinks list, which makes it the perfect spot for a nice dinner out.  Start with the fried cauliflower and brussels sprouts topped with parmesan, and then move on to the Ultimate Pork Ramen Bowl. The bowl includes braised pork belly, char siu BBQ pork, crisp pork cheeks, marinated egg, cabbage, sprouts, cilantro, and Chinese fried donut swimming in house broth.  It could have used about twice as much broth as it came with, but it was still worth buying. 6021 Cunard Street

EDNA is a top spot for brunch and should not be missed on a sunny weekend morning.  They have a nice mix of standards and more inventive items, whether you’re talking about their cocktails or their food.  We tried one of their specials—a steak sandwich with breakfast potatoes, but also peeped their hummus and eggs, Scotch egg, and breakfast burger, which looks incredibly good despite Canada’s ridiculous laws about cooking burgers.  While we only stopped in for brunch, on the strength of that meal I would go back for dinner without question. 2053 Gottingen Street

Stubborn Goat is another great brunch spot, and in the heart of downtown.  What would make it an even better brunch spot would be if their chicken and waffles had a full-time spot on the menu; the waffles were thing and served as taco shells for the chicken, corn salsa, bacon, and chipotle cream.  One of my favorite dishes put into taco form? Why would you serve anything else?  But they do serve other food—and quite a bit of it.  This spot should not be missed as a hangover cure, or hangover jumpstarter. 1579 Grafton Street

No food rundown of Halifax would be complete without a mention of the junction of Blowers and Grafton, known as the infamous Pizza Corner.  Often crowded in the wee hours of the morning on weekends, the spot is home to—you guessed it—some cheap pizza, as well as other great drunk food like donairs at Johnny K’s and the best newfie fries in Halifax at Willy’s.  Regardless of what else I do while I’m in Halifax, Willy’s is a must-stop for me: their poutine portions are robust and their gravy is perfect.  Add on some turkey stuffing and you’ve got the perfect late-night (or early morning, or any time) snack.  Supplement it with a donair (and, of course, donair sauce) across the street. Blowers and Grafton Streets

Bicycle Thief is your stop for a nicer meal, as well as a meal closer to the beautiful waterfront. It will probably require a bit more forethought than the other spots on the list and you should get a reservation, but a nice night out in Halifax should include this restaurant. They’ve got quite an extensive menu, full of everything you would hope for from your general Italian playbook.  Their fall-of-the-bone short rib was a standout, as were the tuna tartare, mussels, and varieties of seafood pasta. 1475 Lower Water Street

With 2 Doors Down and, right across the hall, 2 Door Down Bar + Bites, you can’t go wrong stopping in either one, since one or the other has the propensity to be crowded on a weekend night. Their starters and small plates are tops (I couldn’t resist their chili cheese fries, and the haddock tacos are knock-outs), and even their burgers are good—especially the smokehouse with gouda, bacon, bbq sauce, onion jam, and chipotle aioli. And if you ask nicely, they may even take the burger off the grill a few second before it becomes completely well done. 1533 Barrington Street

Okay, so John’s Lunch isn’t necessarily in Halifax but across the harbor in Dartmouth. However, it is well worth renting a car or taking whatever transportation is available in order to get there.  I’m a sucker for fish and chips, and this is the best I’ve ever had.  I mean, it’s a lunch counter that’s been specializing in fish and chips for the last 50 years, so they know what they’re doing.  You can get a few other items on the menu, but the fish and chips is where it’s at.  You should also order a side of gravy for the fries, because trust me.  Let’s just say it’s a good thing the gravy comes in a little cup, because you’re going to want to drink every last drop. 352 Pleasant Street, Dartmouth, NS

Finally made it out to @lacroixrestaurant with @ktgoeshiking for their Sunday brunch, and it did not disappoint. Way too much food to list it all, but if you ever go, definitely get the Matcha cocktail.
Finally got to try the Fishtown Scrapple at @breakfast.at.sulimays and it might be better than regular scrapple. The “comeback sauce” will certainly make me do just that.
We did a lot of driving in the rain today, but we did get to see the #Røldal stave church (which is perfect for #spookyseason), #Låtefossen, and #Langfossen.
#Undredal: It’s not fair that people get to actually live in a place that looks like this.
A few shots from our trip to #Aurlandsfjord to check out the #Stegastein overlook and take a hike up Mount #Prest. All in all, a pretty terrific day. #fastandthefjordious
Our home in #Norway for the next week, plus our first camping spot.