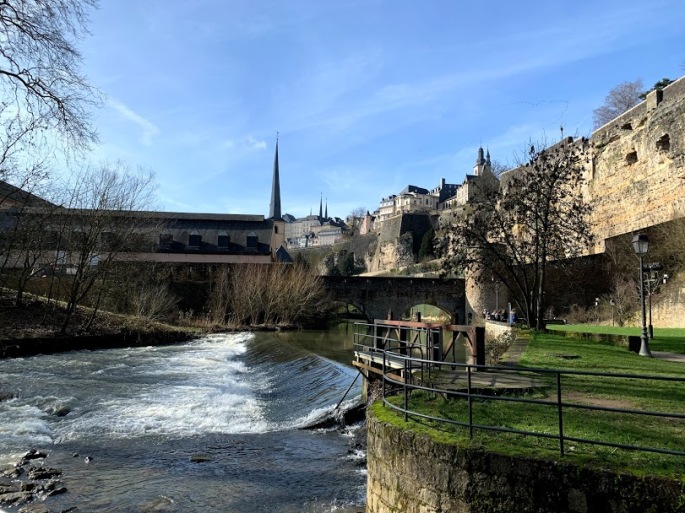 On our recent trip to Paris, where Kaitie and I had both been multiple times, we decided to throw in a new country and take a day trip to Luxembourg. A mere two-hour train ride away, why not throw away our Saturday on a jaunt to Europe’s tax haven? I did a modicum of research to find out the city didn’t have much to offer, but we figured we could play it by ear.  I mean, they have a main square and an Old Town—what more could one possibly want?

Not wanting to throw away any of the day, we awoke incredibly early, still buzzing from the phenomenal meal we’d just had at A La Biche au Bois.  We left Nina’s aptly-named pup Lux and made our way to the train station.  As it turns out, spending a day on the couch with Lux would’ve been leagues more exciting than spending it in her non-namesake city.

We were blessed, in the Place d’Armes (main square) with the most exciting of all city events—a flea market full of expensive shit that only someone with lots of money and little travel experience could love.  We ate at Café Francais, which was decidedly anti-breakfast: they put down cloth table runners, found out we were interested in eating breakfast, and then removed the cloth and gave us paper placemats. After talking about my “terrorist beard” and spilling food on my coat, our server largely ignored us. Which was fine, because I didn’t want to have to talk to him about the strange salad that came with my omelet—greens, corn, ranch dressing, and a tomato that was almost crunchy.  I could imagine the chef proclaiming, “This is what they eat in America! Just give it to them!”

At the very least, we had Um Dierfgen to look forward to.  Open 11:30am to 10pm, the restaurant is just off the main square and serves up many of Luxembourg’s traditional dishes.  While Luxembourg may be a real Kraft Single of a city, at least I’d get to say I’d had some local dishes that aren’t widely available, like their national dish of Judd mat Gaardebounen (smoked pork, beans, and potatoes with bacon), or maybe even the horse steak on their menu.  I didn’t care that it was a little more expensive than it should be, if anything was going to save this trip for me, it would be food.

But, of course, fuck me for trying, because despite being full of drinking locals, we were told the restaurant wasn’t serving food.  Why should it? And why should it say anything about off-hours on its website? Ah, Luxembourg, that most Medium Place of cities. We ended up settling on a bar called Urban with typical bar food for anywhere in the world.  At least I got a local beer.  By that time, though, we were hungry and fed up and just wanted to be done with this place.

We swung into a store to grab some drinks for the train ride home, where we found €5 on the ground, which was the best part of visiting Luxembourg (though it still owes me money for the train tickets). Luckily we were able to resurrect our day with dinner at Zeyer in Paris and some pre-bed wine at Nina’s.  And, of course, hanging out with the real Lux, and forever more the only Lux I officially recognize.

Our home in #Norway for the next week, plus our first camping spot.
A magnet from every stadium I’ve been to this summer.
Starting our #BaseBuddies trip with a sour cream and chive everything bagel doughnut from @bdoughnut_lp. Added a Vietnamese cold brew because who needs to ever sleep again?
Wok Week, grand finale! Tonight was deep frying in the wok: Chongqing-style dry fried chicken (p441) and fried Brussels sprouts with fish sauce, shallots, and chiles (p429). Both a worthy way to finish the week and utterly repeatable recipes.
@kenjilopezalt’s The Wok week, day 5: Pico’s Not-So-Bland Chicken (p80). This was my first time velveting chicken, and the texture turned out great. Can’t wait to do it again!
Wok Week, day 4! Celebrating @kenjilopezalt’s The Wok. Today is Bang Bang Chicken (p569) with a Sichuan smashed cucumber salad (p615). Another one that wasn’t technically cooked in a wok, but was delicious. The “mysterious flavor sauce” on the chicken could go on just about everything. And will.