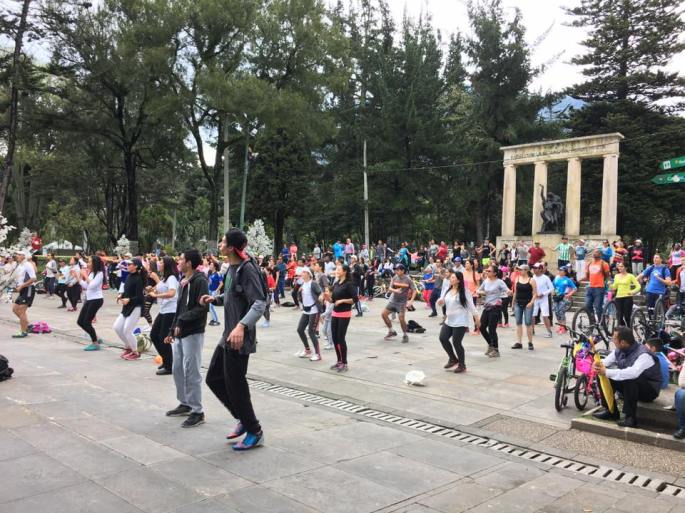 On our trip to Colombia in 2016, we had about 10 days to see everything we wanted to see.  We spent about three of those days in Bogota, and one of them absolutely had to be a Sunday.

Having been an instrumental part in starting Philly Free Streets, LeeAnne had become interested in other pedestrian events around the world, and none of them are quite like Bogota’s Ciclovia.  From 7am to 2pm every Sunday (and on holidays as well), Bogota shuts down 76 miles of streets for people to use car-free.  This program has been going on since 1974, with an estimated 1.7 million residents taking advantage every weekend, which totals about a quarter of Bogota’s population.

We booked a bike tour through Bogota for the Sunday we were there in order to take advantage of Ciclovia.  Bogota Bike Tours, just two blocks from our hotel in the La Candelaria neighborhood, was an excellent choice.  Along with the normal bike tour things you see—a trip through a market to see the local fruit, some history lessons at the major sites, a stop at a coffee shop that roasts its own beans, a game of tejo—we were able to fully experience Ciclovia.

We rode through streets absolutely packed with people.  It made riding a little difficult at some points, but people on foot were cognizant of the bikers and let us through whenever we were noticed.  We stopped to take part in one of the mass exercise classes in the middle of the street (one of many—the event is packed with them), got snacks, and just enjoyed the car-free experience while we did the rest of our usual tour.

The most amazing part, to me, was how many streets were closed down.  The main highway that goes through Bogota—and leads to the airport—was closed! In Philadelphia, they skirt around the issue and close minimal streets and people still complain; I can’t imagine what would happen if the main highway leading to the airport was closed for seven hours every Sunday so people could ride their bikes and dance in the street.

While the bike tour was a great experience and definitely killed two birds with one stone, I would have loved to experience more of the Ciclovia on our own.  While I had fun on the bike channeling my inner Nairo Quintana (and failing miserably at the first hill I came to—my legs still burn thinking about it), walking through the streets with a mass of people will always be a great draw for me.  For any city usually packed with traffic, being able to experience it without cars is always a treat.  Seeing so many people out and about, exercising, hanging out, taking advantage of the outdoors, is always a wonderful thing. 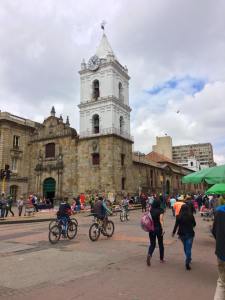 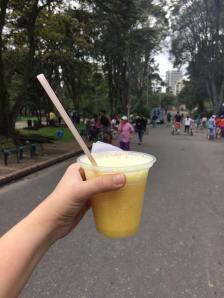 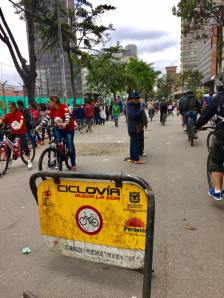 If you are going to Bogota—and you absolutely should—be sure to schedule in a Sunday while you’re there.  Ciclovia demonstrates the best of “mass recreation events,” and is a model for the rest of the world.  Every city should strive to have open streets for its pedestrians, and hopefully we can shrug off our dependence on cars, if only for one day a week, in order to enjoy our cities that much more. 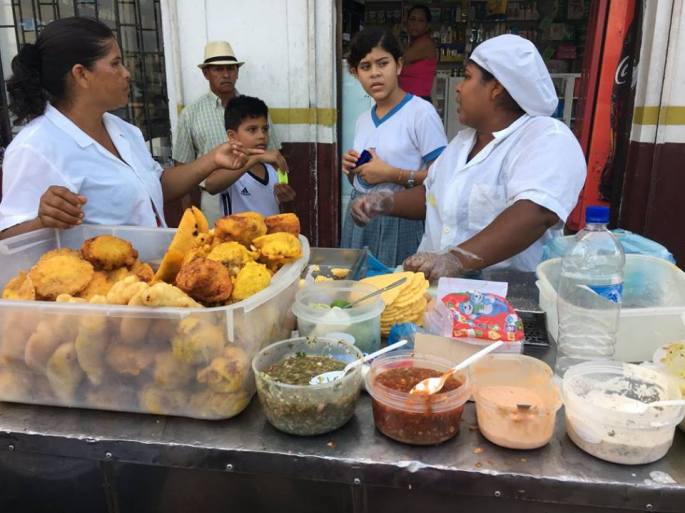 During our trip to Colombia, we spent a few days in Cartagena.  Overall, it was probably my least favorite stop–despite the beautiful old city and the great nighttime fun in the Getsemani neighborhood we were staying in, it was a bit of a beachy/touristy town.  The heat didn’t help, either; when we stopped to get sunscreen, and I was having trouble applying it because it was just mixing with sweat, that should’ve been a sign to stay in the air conditioning at the hotel.

So, in this heat, it probably wasn’t the best idea to taking a walking tour of the city, but my love of food won out and we signed up for Cartagena Connections’ walking street food tour. There was a mixup with our booking for whatever reason, and our guide Catalina had a hair appointment booked for that time, so we decided to wait at KGB, a communist Russia themed bar near the square we were supposed to meet, and had a few bottles of Poker beer to fight the heat and wait it out.

Because of the scheduling snafu, it seemed that for the tour we were being rushed through all the stops.  I don’t know if this was just Catalina’s style, but we still had a full and informative tour, stopping for many different foods we wouldn’t have normally stopped for, and learning more about local dishes aside from just arepas.

That said, however, the best thing was had was probably an arepa; a big, fluffy, white arepa unlike any we had tried in our time in Colombia.  Most of the arepas we’d had were dense, these were almost like fried mashed potatoes. We still talk about how good these were. Another revelation from the tour was a quick stop at a fruit vendor, where we got fresh slices of mango sprinkled with salt.  I try to tell everyone who will listen about this: salted mango was an eye-opener. Sweet and salty always makes a great combo, and this blew my mind.

We also stopped at various street vendors (as it was a street food tour), with one sticking out amongst the rest: a woman frying up various empanadas with a variety of sauces to try with them.  They were all delicious, and very appreciated–the cart was found in an area we probably would not have wandered into, and we probably would’ve walked right by the cart had we been on our own. We also stopped in a shop for a plate of chicarrones, which was also delicious and also in a place we never would have gone on our own.

Near the end, I could tell LeeAnne was getting full when I had to eat more and more of what we were being served, and combined with the heat, we were definitely slowing down.  We happened to be walking about a block or so from our hotel, so we decided to call it quits on the tour (we were the only two).

Despite cutting it short, and despite the miscommunications at the beginning, I would definitely recommend the tour if you’re in Cartagena.  If you can stand the heat, you’ll learn more about the food, get to try a ton of stuff you wouldn’t have otherwise, and you’ll also get some insight into the history of the city.  It was a solid replacement for our Thanksgiving dinner, and that is not something I would say lightly. 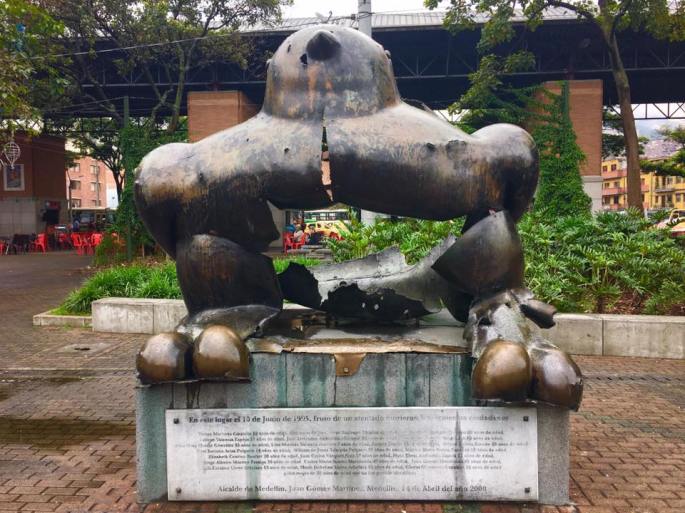 Above: Fernando Botero’s “Birds of Peace” – there is another one exactly like it next to it. This one was used in a bombing in 1995 that killed 29, whose names are listed below it. They are both on display to represent the changes Medellin has undergone.

When my then-wife LeeAnne decided our next vacation would be to Colombia, a variety of friends and family gave us the same response: “Why?” Whether they had been hearing about the drug cartels and violence for the last 50 years or had just been watching too much Narcos, everyone seemed to believe we would be landing in a war zone.  I admit, as a seasoned traveler, I even let the nervousness get the best of me and had to have to good people of r/travel on Reddit cool me down.

The entire time, I should’ve just remembered my favorite travel quote: “No place is as savage as you think it is.”  I really wish I remembered who said this, because they deserve infinite credit.  Nowhere is ever as bad as you hear or think it is; and besides, isn’t traveling about getting out of your comfort zone a bit? Experience new things that may make you feel nervous or uncomfortable?  It brings to mind another favorite travel quote, this one from Anthony Bourdain:

“As you move through this life and this world you change things slightly, you leave marks behind, however small. And in return, life – and travel – leaves marks on you. Most of the time, those marks – on your body or on your heart – are beautiful. Often, though, they hurt.”

And the marks that Colombia left were all beautiful.  The people were some of the nicest we’ve encountered in our travels, and most seemed genuinely happy to have outsiders experience their country which had been getting such a bad rep for so long.  Even Medellin—ground zero for the drug cartels and once known as the most dangerous city in the world—was a vibrant and lively city that was intensely walkable.

Bogota was no different.  The few warnings I had received revolved around the La Candelaria neighborhood (where we happened to be staying, unbeknownst to the people warning us) and being careful at night, but despite walking all over the city and specifically that area at all hours of the day and night, I never once got the creeping nervousness you sometimes get when your body feels you may have entered a dangerous situation.

It really all comes down to situational awareness.  Keep your eyes open to your surroundings, especially at night.  Don’t walk away from an ATM counting your money.  Don’t flash your iPhone all over the place to take pictures.  Keep any valuables—wallet or passport—in some kind of zippered or fastened pocket.  It doesn’t make it impossible for someone to rob you, but it makes it more difficult for pick-pockets.

Over our 10 days in Colombia, only once (in Cartegena) was I propositioned to buy cocaine.  One time.  In Colombia.  And even in that heavily-touristed city, the type of city where petty crimes usually thrive, I didn’t feel ill-at-ease.

I don’t know if this post is more about traveling smart or about going to Colombia, but I will say you need to do both—be aware of your surroundings as you travel, and definitely go to Colombia.  See the cities, learn the history and what the people have been through, and watch Narcos if you haven’t just to see how drastically things have improved. Just don’t expect much from the food—its boringness is inversely proportional to the vibrancy of the cities and especially the people.

Wok Week, grand finale! Tonight was deep frying in the wok: Chongqing-style dry fried chicken (p441) and fried Brussels sprouts with fish sauce, shallots, and chiles (p429). Both a worthy way to finish the week and utterly repeatable recipes.
@kenjilopezalt’s The Wok week, day 5: Pico’s Not-So-Bland Chicken (p80). This was my first time velveting chicken, and the texture turned out great. Can’t wait to do it again!
Wok Week, day 4! Celebrating @kenjilopezalt’s The Wok. Today is Bang Bang Chicken (p569) with a Sichuan smashed cucumber salad (p615). Another one that wasn’t technically cooked in a wok, but was delicious. The “mysterious flavor sauce” on the chicken could go on just about everything. And will.
Wok Week, day 3! Spicy shirataki noodle and cucumber salad (p335). This is a cold dish, so technically no wok was used, but it was still delicious. So good that I didn’t even notice it was shirataki noodles - and I’m not usually a fan of alternative noodles. This sauce will go great with a lot of things.
Wok Week, Night 2: went simple with the Shanghai-style sesame noodles (p323). Simple, but still delicious. You can’t see the chili oil mixture underneath the fresh what noodles, but boy was it there.
Wok Week, night 1! To celebrate @emmapoppin sending me a signed copy of @kenjilopezalt’s The Wok, I’m making recipes from it all this week. Tonight is gong bao ji ding (p64). Made sure all my prep was done in advance and the wok fan was ready to go. First night was a success.